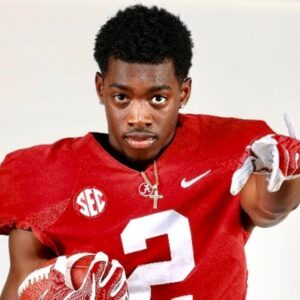 One of the top safety prospects in the country and a five-star prospect in the Top247 and a composite four star by the remaining recruiting outlets and ranked No. 25 on 247Sports’ Top247 list and also rated as the No. 2 safety and sixth-rated player from Florida by 247Sports and the No. 45 player nationally and fourth-ranked safety by Rivals and Florida’s 12th overall prospect and the nation’s No. 3 safety in the 247Composite and selected to the All-American Bowl roster and No. 147 in the ESPN300 and the outlet’s No. 4 safety prospect and a two-sport athlete who is also a standout in basketball and coached by Ed Hill at John Paul II Catholic High School in Tallahassee, Fla. and signed with the Crimson Tide over in-state Florida, Georgia, Miami and Florida State.