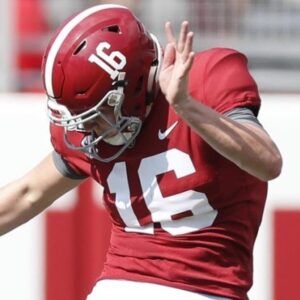 Assumed the field goal and PAT duties for the Crimson Tide as a sophomore and first team All-America honoree by CBS Sports and picked up second team All-America accolades from The Sporting News and selected as a finalist for the Lou Groza Award presented annually to the nation’s top placekicker and totaled 126 points to rank fifth in the country and perfect on all scoring attempts with 84 PATs and 14 made field goals in as many tries and also contributed 69 kickoffs for 3,614 yards to average 52.4 yards per kick with 14 touchbacks and named one of the special teams players of the week by the Alabama coaches for his play against Texas A&M, Georgia, Tennessee, Mississippi State and LSU.