Bumpers leaves a lasting legacy of dedication and loyalty to Jackson

When friends reflected on the life of Bob Bumpers, the words “loyal” and “dedicated” were frequently used.

Bumpers, who died Sunday after battling cancer, was laid to rest yesterday, but his memory lives on through the students he mentored and the firefighters who thrived under his leadership.

Jackson Fire Chief Bobby Brooks said Bumpers, who was captain of the north fire station, was always ready to answer a call.

“He was always there,” he said. “I don’t know if there is anybody in the department who answered as many calls as Bob did over the last several years. He was just there to serve, and he didn’t want a lot of recognition for it.”

The department hands out awards each year for attendance, and Brooks said Bumpers was a frequent recipient.

Bumpers was loved by all in the fire department and in the community, Brooks said. 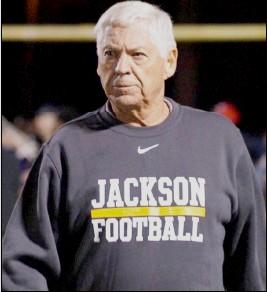 “I don’t think I have ever heard anybody say a bad word about Bob,” he said. “He just quietly and skillfully went about his business of doing what he was supposed to do.”

Brooks said Bumpers oversaw Engine 704 and Ladder Truck 4. This position came with a great deal of responsibility, but Brooks said he was always up to the task.

“He will be sorely, sorely missed,” he said. “He was as dedicated as anyone you would ever see. He was there day or night. He was really special.”

The same was true in athletics. Jackson High School Head Football Coach Danny Powell said Bumpers, who was a volunteer on his staff, always had the best interest of the players in mind.

“Coach Bumpers was a great guy,” he said. “He loved the kids. He (coached) because he loves it and he loved to work with the kids.”

Bumpers had the ability to coach on both sides of the ball and transition into other sports like softball, Powell said. He added that Bumpers always went about his duties with a smile on his face.

“He was a great guy to work with,” he said. “He never complained about anything, he always worked hard and was always positive. It is going to be a huge loss for us.”

Bumpers coached at Grove Hill Academy from 1973 through 1978, winning a state title in 1976. It was the school’s first. The team he left won the 1979 title. From GHA, he went to Clarke County High School from 1979 through 1986 as the head coach for football and baseball. He also taught driver’s education and science.

Bumpers served as the head softball coach at Jackson High School and was a volunteer assistant for the football team for many years.

He was a member the Clarke County Representatives

Committee and National Wild Turkey Federation (NWTF). An active member of the First Baptist Church of Jackson, he was a longtime Sunday School teacher and deacon.

He is survived by his wife, Deborah Bumpers; daughter, Candace Bumpers and numerous other relatives and friends.